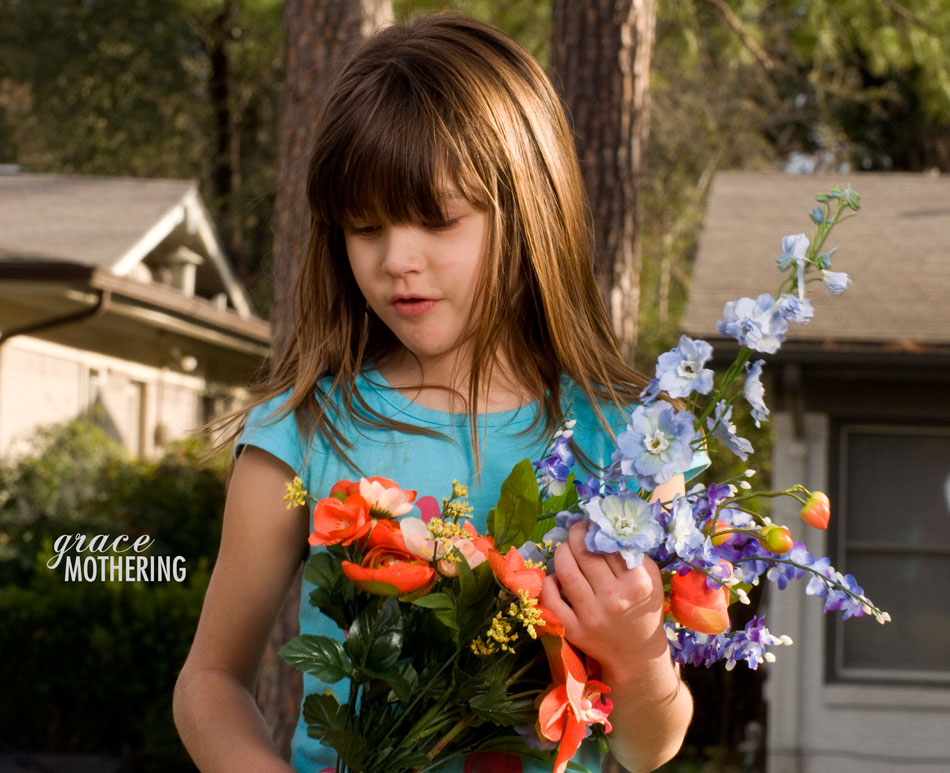 4H projects are in full swing, and it's been a busy week. G made body scrub and oatmeal face cleanser at hers, and W learned how to do two types of hand stitches, and did a triangular pinch pot. I taught my woodcarving project, and had them practice using their knife on soap and sweet potatoes. I've been using the cleanser, and normally my skin looks terrible at this time of month, but it hasn't looked this good in a long while. The biggest thing is kicking the sodium lauryl sulfate cleanser habit. SLS ruins your skin!

I haven't taken many photos this week or played with my lights until today. I got a couple of hours to myself at the craft store, and bought some items to create backdrops and make accessories for a stylized shoot. G is holding some of the flowers I bought so that I could test some settings. For the next couple of days, I will be making some drapey gowns and headpieces. I really hope the finished images look at least a little like what I envision.

My grandma is doing better; she has been moved out of ICU into an interim room until she starts rehab in the next couple of days. I haven't gotten to go see her in a while since I've been carting the kids all over the place, but I'm going to give her a haircut on Sunday.

We are building a fence to close off where the chickens keep escaping, and so that code enforcement will no longer have prying eyes into my backyard life. We got a citation because chickens are supposed to be restrained in a coop at all times, but that defeats the whole purpose of having free range chickens, in my opinion. Our four dominique pullets are getting bigger, and the big girls don't seem to mind them. I was worried about how they'd be accepted into the flock.

Well, now you're up to speed! Have a great weekend!