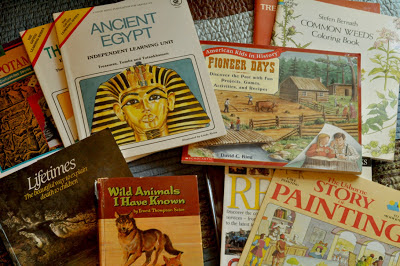 I needed to get some costumes for the boys for the Halloween party this weekend, so we went to Thrift Town. I found Noel and Jonas "Golden Dragon Ninja" costumes for a few bucks each. They're running around the backyard all suited up now.

It was a good day for books. I already have Wild Animals I have Known on Kindle, but it's nice to have it in real book form. Excited about the history unit studies, and the Pioneer Days has been on my wishlist for a long time. If there is ever a DK or Usborne book, I must buy it. Those are read over and over here. Westen came home with another Harry Potter audio cassette book - The Prisoner of Azkaban. The sounds of Jim Dale's voice never ceases from his room.

I bought myself some green and pink butterfly wings for my costume. I was originally planning on being a greek goddess (Demeter), but I couldn't find readily available accessories for it. I'm going as a flower fairy now. I will have lots of photos of us in costume after the party on Saturday.

I haven't felt very creative lately, so I'm in TV distraction mode. I watch Merlin on Saturday, Downton Abbey on Sunday, Revolution on Monday and finishing up Firefly. I have mixed feelings about Firefly. It has more sex and violence than I'm used to - I'm a total prude when it comes to media. I don't like the aesthetics of it; costumes or sets, but that may just be because I don't normally watch any sci-fi. But I like the humor and ensemble cast. It is well written.